Nearly everyone in this world likely has been educated in Darwinian thought, and many generally assume, rightly or wrongly, that “struggle for existence” is the same as Darwinian “survival of the fittest.” But have we ever thought through what that means? And is life actually a survival of the fittest? And is that what we are destined for? And finally, do we really think that is a wonderful thing, that somehow, we can become “more and more highly evolved” through this “struggle”?

If life was really survival of the fittest, we should get rid of handicapped people, and we should get rid of pediatricians, and specifically get rid of pediatricians who take care of weak newborn babies (like me). Of course, we should have abortions everywhere freely available, when we don’t “need” any more “less than perfect” children. And obviously there is no need for fetal surgeons, who even operate on ill or deformed babies before birth! Why are we trying to save all these children who are “not so fit,” when the “natural order” of events, which should be very good, “nature’s mandate,” is the survival of the “fittest.” Let nature take its course! Its “natural” course!

As a pediatrician, I feel this issue very passionately. Of course! In particular, I was a pediatrician looking after newborn babies, especially very sick premature babies and handicapped babies. And I was founding director of one of the first Perinatal Research Institutes, which in today’s major centers, now include a big program of fetal surgery. Why should we be doing all of this, if good “mother nature” knows what she is doing!

Plus, get rid of all patients who are chronically ill, people with diabetes, tuberculosis, and leprosy, people on respirators, people in wheelchairs. There is a huge list of people that we can dispose of, along with the doctors, nurses, pharmacists, and assistants etc. looking after them. We would certainly save a lot of money for the country, and we would be a stronger nation! Or would we?

In point of fact, there would really be no need for human rights, and no need for altruistic lawyers protecting those who are disadvantaged, or those who are poor: they should simply all be eliminated, because they waste so much energy, and there is really no need for them at all. In fact, our nation would be much greater without these! Indeed, this is what happens in North Korea, what happened in Nazi Germany, and what happened during dynasties upon dynasties of “great” emperors. Surely let the fittest survive, which basically means those with power, strength and military might, they are the only people who should survive! Oppress the rest, squash them, eliminate them! Only the mighty kings should reign, it is their right and their reward. Why should there be even justice? There is no need for that, since only the fittest survive. 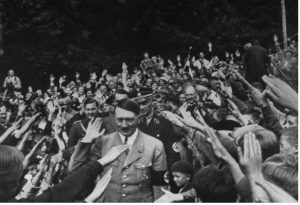 I’ve been reading about the Russian Jewish experience of immigrating to New York City in the late 1800s, when these immigrants had to fight their way up from the bottom of the ladder, to be finally successful in the clothing industry, and Wall Street. It was described as a dog eat dog experience, a survival of the fittest, and among them there were people who were the fittest, and who “therefore survived.” Unfortunately, many people’s experience of “surviving in the big city” is very similar, whether it is in Hong Kong, or Mumbai. So, is this the norm, is this what we are destined for?

In fact, for thousands of years, it did seem that the world was like that for many people. It seemed that the only way forward was to scramble and scramble, and to basically claw your way up the ladder, over the dead bodies of others. Then came a Jewish man named Jesus who showed up, and declared that, “Blessed are the poor, blessed are the meek, and blessed are those who seek for righteousness.” What he thought and taught was basically “ridiculous” and totally radical.

He even taught that we should forgive our enemies. Forgive our enemies! Instead of hating and killing them. What an upside-down thought! And for saying all that, the mob, the great religious leaders, the mighty Roman officers, all came together and pronounced him as a dangerous rebel who should be killed in the cruelest way, to die an excruciating death, on a crude wooden cross, a punishment normally reserved for the most wicked. So indeed, the fittest were supposed to survive, and those who tried to teach the opposite deserved to die!

Then amazingly, some parts of the world began to change. A new species of humans, followers of Jesus, rose up, and started preaching about love, caring for each other, and picking up neglected babies thrown away in rivers, on streets and in garbage. And when great and terrible plagues swept through Europe, the population panicked and most ran away from the city, except for loving Jesus believers who went around to treat the sick in the streets, and to bury those who had died, in spite of the tremendous risk to their own health.

And thus was born a totally new force, a force of love and care, that literally changed the world, preparing the way for hospitals and educational facilities throughout the world, and preparing the groundwork for science and reason in the West. A new system, that stared dark instincts in the face, and tried to bring love and compassion into a hurting world. The sick, the disabled, the feeble began to be looked after in a tender way, and society began to change.

This philosophy was best portrayed in many paintings and sculptures as the shepherd carrying his hurting sheep in his arms, binding its broken limbs, just like the statue in the historic archway of the Cincinnati Children’s Hospital, one of the foremost children’s facilities in the world. The new heaven’s mandate, tianyi, was radically, to care for the weak, the poor and the suffering, and often not the fittest! So that the weak, the “unfit,” will survive, instead!

So, let me ask you, what is your preference? Would you like to live in a “Darwinian society?” Or would you prefer to live in a Jesus foundation derived society? And why? Wouldn’t it be better to live in the “natural way,” the way that supposedly will always make us “better and better,” and just evolve our way into supreme beings ultimately?

In the history of mankind, “survival of the fittest” has just been a slogan for oppression, and not truly a biologic fact, no matter how we have been brain-washed. The concept and principles preceded Darwin by thousands of years. There is no evidence that this way of life evolves us into “higher” creatures. And, certainly, I do not want to live in a land of the strongest! I have no doubt that I, and I think you also, would like to live in a land of survival of the kindest, the peacemakers, the most loving; which will necessarily include the autistic, the Down’s syndrome babies, and those with missing natural limbs. Please give me a loving society that treasures survival of the “not so fittest,” which seems, without a doubt much more in synchrony with what we are really “meant to be.”

Footnote: But, you might say isn’t capitalism just a form of Darwinian survival of the fittest? I would like to think that capitalism is a competitions system where everyone can compete, and it could indeed become “Darwinian” struggle and survival, but it need not be. If capitalism works in a society with a Jesus ethic base or influence, the antithesis of Darwinian “survival of the fittest,” as we have described above, then it could work well, and theoretically not be cruel! Which means to care for the disadvantaged, to have justice, and to respect the rights of each human being created in the image of God, all of which are core Jesus teaching concepts. But these are big topics for future discussion!