“You can’t do it!” “It’s impossible!” “It’s never been done before!” A sharp “no” quickly terminates many great ideas. It’s a lot easier to say, “no,” than to say, “let’s hear the details,” and probably in history, many good ideas have simply died away, with no one knowing about them. “An idea shot down,” as commonly expressed.

More than 35 years ago, I remember vividly a debate about the problem of teen pregnancy, during our weekly Children’s Hospital “pediatric grand rounds,” for all faculty and residents. The backdrop of the time was the feeling that there was really not much we could do about this sad problem. The speaker that day gave the usual annual dismal talk on teen pregnancies, and showed the rates just going up and up over decades. He concluded glibly and crudely, that “I guess we should just give them more condoms.”

At this remark, I became passionately upset, because, as a specialist in prematurity, I had seen too many premature babies born from teenage parents, and the chaos it created in the families. It wasn’t a joking matter. I shot my hand up immediately, and challenged him with an age-old, not politically correct, idea, asking literally, “Whatever happened to abstinence?” The objections to my remark were instant and numerous, “it can’t be done,” “sex is just natural,” “no one is able to control that,” “we cannot introduce morality into the schools.”

A heated debate ensued. Among my many rebuttals to these “naysayers,” I reminded my verbal opponents that, we could give up on people smoking also with very similar arguments. And yet we know that, with proper education, and concerted steps to dissuade people from smoking, the whole outlook on smoking has changed dramatically over the last few decades. And indeed, we do teach morality all the time, to youth at home and school, such as, “do not steal, cheat, fight,” etc. I would surely hope we do that!

One by one, I met the objections of the naysayers, that day and in the months and years afterwards. Fully provoked by these arguments, I was stirred up with enough “anger” that I decided we needed to do something about this awful problem.  Together with Dr R, and drawing from professionals in the field, we helped devise a program in the public schools that promoted abstinence, technically called “prevention of sexual involvement,” taught by upper-class teenagers to younger teenagers, and introduced it into the public schools. Over several decades, the rate of teenage pregnancy fell by 50 percent, which I think was a remarkable number, given that the previous decades had steadily increasing teenage pregnancy rates. To poetically borrow a phrase, we could say, we “changed the arc of history.”

Of course, there were always naysayers, who now, seeing that the tide had remarkably reversed, switched to interpreting the data in a different way, but our “conscience is clear,” and “the facts speak for themselves.” It was very satisfying to our wonderful team, led by faithful steady no-nonsense “Chris,” to see it happening before our eyes, regardless of how people objected to it so strongly before, or how they interpreted it differently afterwards.

There is the famous story of Robert Morrison, one of the earliest missionaries to China, who was criticized for going to China, by a cynical challenger, who said something like, “who are you to think you can change the great land of China?” Basically, questioning his ability to do anything in China, with its elegant millennia of history and culture. Morrison is said to have responded, something like, “Indeed, I cannot! But God can!”

It was this kind of fortitude and persistence that drove him to go to China and live there, at a time of great turmoil and even danger to his life, in order to work among the people, translate the Bible into Chinese, and to share the love of God there. His ultimate burial in a cemetery in Macau, after decades of dedicated service in China, testifies to his ability to transcend all difficulties by his single-minded pursuit, regardless of numerous naysayers. Incidentally, it is often said today that, soon China will have the largest numbers of Christians in the world. In spite of lots of naysayers down the generations.

A great need arose from one of the SE Asia missions that our church supported, in several poor villages. This happened at a time when our church, which was the main supporting church, had many major competing needs of its own, for reconstruction and new building needs. So, when this need overseas was raised, there were indeed numerous objections that this was not possible, something like, “it’s impossible at such a time as this,” “there are too many needs,” “we have too much bureaucracy to go through, too many committees.”

So, methodically and systematically, we met each objection one by one. We worked through several committees, going through all the objections. We even solicited objections before-hand, so that we could adequately face them, head on. Again, focused attention, calm meeting of objections, step-by-step, finally allowed us to reach the necessary consensus, without loud alarms or any real confrontations. And to the surprise of many, even at a time of great competing needs, we were able to allocate a good amount of support, drawn directly from church reserve funds, which providentially helped tide over a major crisis the following year. Naysayers can be, and should be, met calmly just like any other problems!

In my thinking, when someone boldly challenges you, that “this is impossible,” the correct response is to go back to the drawing board, and think and pray about it to see what you could do about making it possible, given the major challenges. Calmly, and without panic, nor anger. Then after a great deal of thought, including asking the advice of many solid advisors, solicit many objections deliberately, so that, point by point, you can thoughtfully respond to these objections, without any need for drama! Do your homework, be passionately focused, and work step-by-step towards your goal. It’s really like a major grant writing exercise, methodical and yet “hypothesis driven,” and here I think that my large experience with writing grants, helps me tremendously! Just slog it out!

One of the largest number of naysayers must be the USA population, 300 million let’s say. Being a full democracy, we have millions and millions of voices saying, “You can’t do it, that’s impossible, that’s crazy, that’s racist, that’s cruel.” US national leadership must be the most difficult in the world, with everyone a critic, so it’s fascinating to watch the process and results. My usual simple approach to life at many complex levels is to “watch the ball” and see where it goes, don’t get side-tracked by naysayers, but keep your mind calm and clear. And “let’s see what happens.”

A final story, back to my academic roots. As a baby doctor working in the intensive care units, we encountered huge clinical problems in newborn babies whose mothers were diabetic (the insulin requiring type). Their babies had in particular often many major body malformations, and very low blood sugar. Challenged by this great concern, I came up with a rather dramatic idea, and got together an excellent medical and health team, to start a major clinical trial of whether we could strictly control the mother’s diabetes, basically from the very beginning of pregnancy, to prevent the major baby problems. The objections were numerous and sharp. Such as, “it cannot be done!” “No woman would come to see the doctor so early in pregnancy, and to undergo such strict control.” “This study would be much too difficult, requiring management of the diabetes at 2 levels throughout the entire pregnancy, in order to prove it.” And so it went.

All of these criticisms were real, and again, we went through the objections, and met them, one by one, devising various ways of countering the criticisms, to make the study viable. After submission of our large grant proposal to tackle this issue, I remember vividly the remark of one of the site visit reviewers, from the NIH (National Institutes of Health), who basically said, “This is an extremely challenging study, practically an impossible study, but no one else is willing to do it, so we are awarding the study to you!” One reviewer said something like, “This is a crazy study, but you all have the guts to do it, and we respect that.” They respected us so much that ultimately, in 3 stages, we were given a total of $15 million to study the problem, a huge sum at the time. Naysayers must have been somehow swayed, I guess convincingly.

Even though it seemed like many people were against the study, we proved that, given enough education and encouragement, women could indeed come early in pregnancy, and half of them (as part of the study design) also were even willing to stick to a very strict program to vigorously control their diabetes from the beginning of pregnancy to the end of it. We surmised a major reason was that the women were highly motivated to protect their baby, and therefore they were willing to do much more to allow their diabetes to be well studied, more than any other period in life when they were not bearing a child.

By the time our study was over, and till today, when women are diagnosed with severe diabetes and are planning pregnancy, there is little question that they should be, and would be enrolled in intensive diabetes treatment programs, from the very beginning of their pregnancy, and even before that. The great result is that nowadays we barely see any extra baby malformations (like severe heart and brain malformations) from the mother’s diabetes, which were so common in past days. Sometimes, the young modern doctor might even wonder if there really were malformations in this situation, since they have never seen them. 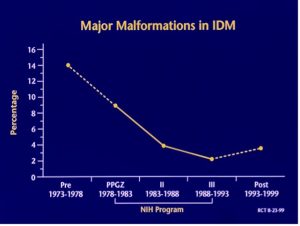 Further, the younger generation of doctors easily forget, and think that, strict control of diabetes in pregnancy is no big deal nowadays, and “of course” mothers come into treatment very early on in pregnancy! It’s always funny that naysayers might turn into nonchalant acceptors, but the best is when the problem goes away so much that no one even remembers it as a problem! I guess to that extent, it’s just like no modern doctor has seen polio, rabies, or plague, and might even begin to doubt their existence!

In truth, naysayers can be quite valuable! They are often considered an irritant, I suppose. But the irritants can irritate us so much, that we produce a much better product, and I think we become better persons through our naysayer “friends.”

Where Are You From?