The thyroid is a very funny organ, one of the few organs you can actually touch, right in your neck and right at your throat. I am especially interested in it partly because, right behind the thyroid, there are four little organs called the “parathyroid glands” which produce “my special hormones,” that I spent many decades studying. The best thyroid surgeon in Cincinnati was my great friend Dr. James Fidler. He was one of the kindest doctors I have ever met, and he loved to go on medical missions trips. In fact, he went with me 17 times to China! He loved to go up a hill behind the town that we were working in, to pray for the town. This he did early in the morning before surgery (surgeons are always up before dawn). Early one morning in India, he was doing the same thing, and halfway up the mountain, he collapsed from a heart attack.

The village people were so touched, that 1000 people showed up for his funeral. The funeral had to be done within 24 hours by local custom, so that his family did not even have time to fly from the USA to attend the funeral. But I will always remember him especially for the many times we worked together, and even sang together in China.

Often, he would give a talk on the thyroid and parathyroids, and I would be his translator in my primitive Mandarin. However, when he got to the subject of the parathyroids and calcium, it was “my territory.” So if he gave one sentence, my translation became four. He showed surprise about the discrepancy in length, but I reassured him that it was going to be a better talk. And it was! Anyway, a surgeon is supposed to operate, not to give talks. 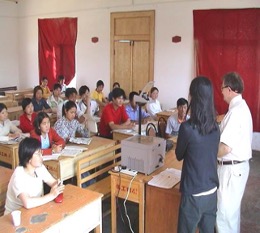 At the beginning of my research career in “calcium,” I was learning to measure different hormones that controlled calcium in the body, especially the parathyroid and later, vitamin D. But along came this new hormone called calcitonin, which was produced by the thyroid, so we were eager to measure it in babies, since there was next to no information about that. My research assistant had learned the technique of measuring calcitonin, and she used the blood of various people in the laboratory as “controls.” To our great surprise, her blood calcitonin level was sky-high. She was found to have thyroid cancer and measurements of blood calcitonin became a “marker” for early detection of thyroid cancer.

In the last decade, something surprising has been happening: one by one, I heard of many doctor friends developing thyroid tumors! My Korean former fellow, my China scholar friend, and a doctor member of our Asian church, developed thyroid tumors, and suddenly we were hearing unofficially that many doctors at the famous Peking Union Medical College had developed thyroid cancer also. Sure enough, in November of 2014 a report came out about an “epidemic” of thyroid cancer being reported in South Korea. But the point of the article was that there was a lot of overdiagnosis of thyroid cancer, because of early detection using modern-day ultrasonic (“echoes”) techniques.

I really have another love story with the thyroid. Even in medical school, during physiology classes, when we measured our own body functions, I noticed that my heart rate was always running above 90 per minute, much faster than the rest of the class. I wondered why my metabolism was running so fast, and why I was always so driven! Then one day in the newborn intensive care unit, while I was trying to start an intravenous medicine in a small premature baby, I noticed that my hands were shaking quite dramatically. I was in the middle of my internship, and my weight had dropped 20 pounds to a mere 95 pounds! I went to see my doctor, and the moment I walked in, he said, “you have thyrotoxicosis”, meaning I had an overactive thyroid. So he slammed me into the hospital, forced me to take two weeks off, and gave me five meals a day to fatten me up. It was one of the “best two weeks” of my life, when I could read many, many books, and relax in a hospital bed away from my very busy internship

Ministers and Elders serving together
传道人和长老喜樂相处