One defining moment in my language story happened in Beijing, 35 years ago, in 1984. Contacts between China and the outside world had just opened up, and I received an invitation, to speak to pediatricians interested in vitamin D and rickets in childhood. This topic was my super-specialty and expertise, so I quickly accepted. In those days, early 1980s, before emails and smooth international phone calls, correspondence with my host, the Beijing Nutrition Institute, was awkward. I assumed that I was one of many speakers lecturing to a physician group, as I had done many times at other locations.

As I got off the plane, the distinguished Institute Director bowed, to ceremonially welcome me to China. After some formalities, he began to clarify to me that, contrary to my imagination, actually I was the only speaker, for 17 lectures to the group! My mind flashed to my mother’s oft reminder to always bring an extra talk, or essentially an extra set of slides, “just in case” I got asked to give another talk. But this was 16 additional lectures! So, after the shock wore off, I quickly realized my 2 small boxes of slides would not work.

In the hotel room, I began organizing rapidly a series of brand-new talks, totaling 17 in all, by breaking up my talks into focused, detailed sub-talks! Calcium, magnesium, phosphate, vitamin D, excess vitamin D, deficient vitamin D, parathyroid hormone… you get the idea. It was the most I had ever talked continuously around my favorite theme, to a totally “captive audience,” and I never repeated this ever again! No other audience would sit still for 17 lectures, over 5 days, on “vitamin D and rickets.” And, in Mandarin, sort of!

Since my Chinese was so weak, I started off lecturing naturally in my mother language, English, with a hapless translator at my side, translating sentence by sentence. I’m sure the translator-doctor had little translation opportunity in the early 1980s, and had been volunteered, as the only person who had the guts for the job. During the talk, I repeatedly stopped and interrupted her translation, since I knew enough spoken Mandarin to know if it wasn’t correct. (Incidentally, the usual poor westerner has no idea of what is being translated!) By the second lecture, she and I were both getting quite frustrated. So, in a moment of inspiration (!) I asked her, before each talk, to write on the blackboard, 20 to 30 of the most difficult words that I would likely encounter during each talk, in English and Chinese, like a mini-dictionary on the board. 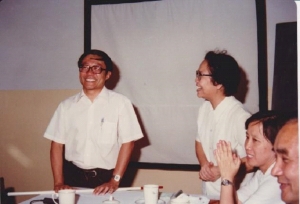 Photos 1 & 2: 35 years ago, at my first Beijing lecture, where I learned to give my first lectures ever in Mandarin Chinese, during the course of 17 (!) “spontaneous” lectures on vitamin D.

During the talk, the now relieved translator did not need to stand awkwardly beside me, but I asked her to sit in the front row, as my consultant, while I gave the talk, in Mandarin! My first time ever. As they say, there’s always a first time, and this was it, unplanned and unlikely. Whenever I got to difficult words, which at first was often, I looked to the blackboard if it was there, or asked the translator for the Chinese words.

Often I made the entire group say the word couplets on the board, together with me, so they learned the words in English, and I in Chinese. It was fun for me to learn Chinese in this lively way (group teaching one person!), while prepping me to teach English to thousands of Chinese 7th graders a decade later.

I learned the more difficult technical words step-by-step, as we progressed through 17 lectures! And I could sense my Mandarin, my confidence, my chutzpah (brazen brashness, see story A), amazingly improve during each talk. Plus, the translator also had a real paper dictionary for backup, so I did not have to panic. From that point, I was home free. 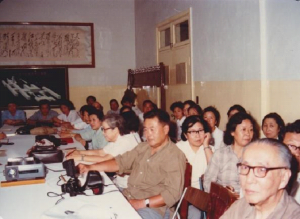 It worked so well that afterwards, whenever I lectured in China, I used some variation of that technique. For example, I would prepare a list of difficult words ahead of time on a slip of paper, for myself to peek at during talks. And thereafter, my talks basically were given in Mandarin, usually with bilingual slides. Even my non-Chinese-speaking mother would have been proud! But it was pure chutzpah for me to do that!

And, of course, today I am following in that chutzpah tradition. I don’t let my relatively weak Chinese inhibit me! I write my uncle Reggie stories, in English, and work closely with a faithful band of translators who translate them into Chinese. Through interacting with translators, plus referring often to Pleco Chinese-English Dictionary App, sometimes Google Translate App, I am continuously learning lots of Mandarin. Some of my readers have even thought I wrote my articles in Chinese, and are rather shocked when I tell them that my Chinese is not truly “presentable.” But I am bold and confident!

In contrast, I saw vividly how lack of confidence and courage in language just destroys language learning. In our medical mission days, we taught English at many village schools. Sometimes English teachers there were shy to meet foreigners, when we offered to meet in evenings to just chat, and hopefully improve their English. 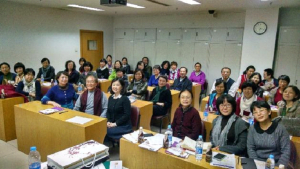 Photos 3 & 4: 30 years afterwards, now confidently teaching in Mandarin in the same city. Many, including my dear wife, are surprised at my confidence to teach exclusively in Mandarin, in China or America. I am also surprised!

Language teaching for them was often just reading English words from textbooks, and memorizing phrases on the blackboard, but they were distinctly uncomfortable to actually use English in conversations. It took a while to convince them we were harmless, and it could be a fun experience, which seemed so when we actually did that. Both teachers and kids had had no real chance before that, nor courage to practice English in “real life.” So the language remained foreign, strange, and basically useless to them.

Even as we ourselves are nearing 80 years of age, in these recent years, we discovered a new language twist. My wife and I have 4 Chinese languages in common between us, though I have been weak in most. After our Seattle move, we began to rotate these languages in daily prayers. Prayer language usually has more sophisticated words, compared to conversations, so it was challenging at first. 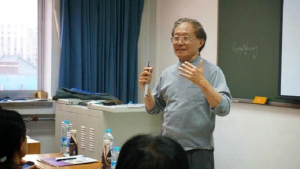 We were pleasantly surprised however, that, as we prayed, words decades forgotten, magically appeared naturally, as long as we had the chutzpah to speak! Like modern “AI” assisted typing, where words can “just appear, like reading your mind.” As long as the “I” part of AI is intelligent! I think our omni-linguistic Creator wouldn’t mind our brashness in multi-lingual communication, or might even be pleased that we are boldly trying.

I will end with one great story about a 10 or 11-year old girl we met in a small Yunnan town, in SW China. She was so confident that she dared intercept us, 3 foreign men, on the streets of her town. She spoke to us confidently in good English, which really surprised us, since schools did not usually teach English until seventh grade, and she was not there yet. She explained she learned English just from listening to tapes on her own! Talk about being bold and brash! 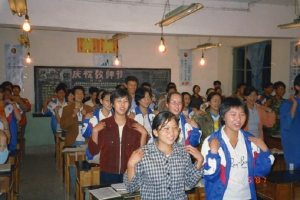 Photo 5: Small town middle school kids just love to learn language when given inspiration. Their chutzpah increases as we energize them and embolden them.

Shockingly, she then invited us to go to her home to chat. Of course, we declined: strange men cannot just be invited home by a little innocent girl. But she insisted, and kept waving to a couple she said were her parents on the other side of the street. She made some wild gesticulations about the invitation, the couple agreed somehow, apparently from their hand gestures, and we found ourselves in her home.

Alone, she entertained us with famous Yunnan Pu-er tea and Mandarin oranges, which was standard adult hospitality, and proudly showed us family photos in neatly laid out photo albums, all the while chatting away in English. I was totally flummoxed, and inspired by her warm chutzpah! This was obviously the new China! More than 20 years ago! 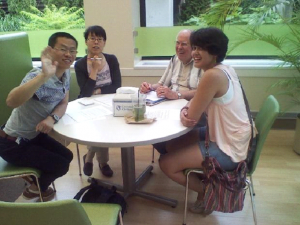 Photo 6: “English corners,” started in China, have migrated to USA, as reminders of how important chutzpah is in language learning, anywhere.

Every child has the greatest natural chutzpah, the innate and mysterious ability to precisely learn languages in her surroundings, without a language professor coaching her. It is just an amazing reminder of the genius of the omni-linguistic Creator. May we all have that innate childhood boldness also, and be inspired. Please read my Reggietales.org, “Mystery of language.”

Mystery of Language (Part B): Where Does Language Come From?