Even though I grew up in Asia, my first language was actually English, which is quite confusing to many. And Mandarin is my fifth language, after Swatow (Shantou, or Chaozhou), Cantonese, and Hakka (Kejia), in rough order of acquisition, which adds to my language story complexity. Instead of the usual student from Asia coming to America and learning or improving his English, I came to, (or “returned to”) America and learned Mandarin, in a Midwest town that had few ethnic Chinese people.

My mother was American born, from Seattle. Although ethnic Chinese, she never learned Chinese. At home in Asia, my parents spoke in English to each other. I spoke to mother in English, or in Swatow (Shantou, a southeast China coastal) language, since she knew some “pidgin” Swatow. Growing up, my Chinese education was therefore limited, more like American born children trying to learn Chinese in America.

In 1945, when I was nearly 5 years old, World War II ended, and my parents brought me out from the ancestral village, where we had been hiding for a few years from the Imperial Japanese Army. They sent me immediately to the excellent English language Diocesan Girls (!) School. The Boys School would not fully open until 1947, and in any case, did not accept boys before 5th grade. I think I was rather proud of the fact that, at one time, I was one of only 3 boys in the school, especially since I don’t remember being “bullied” at any time by the girls. In contrast, as I was small in size, I was certainly bullied by big boys later in the Boys School.

There were no bad memories to make me biased against girls at all, and maybe I even learned to treat girls with extra respect from the experience. Everything at school was basically taught in British English, which strengthened my native English language foundation, and I don’t even remember being taught Chinese at all.

When it was time to leave the Girls School, at the 5th grade entry level, for the Boys School, I was considered too young to enter. I was thus diverted to a “Chinese school” for one year, which, in retrospect, saved my Chinese language from total disaster. Since my Chinese at the time was still practically non-existent, my parents wisely dropped me 2 grades to be safe. But that year gave me at least an inkling into basic local Cantonese language and culture, taught by very fine teachers.

The next stop was the excellent, Anglican Diocesan Boys School, modelled after the private British so called “public school” (Harry Potter fans, note). It was also essentially a forerunner of modern-day international schools, a term not invented then. English was strictly enforced, so basically, I was well “immersed” in written and spoken English for all subjects, except second language classes. So, during this phase, English became affirmed as my “mother tongue,” my dominant language, both at home and school.

At school, I took Chinese as second language, instead of French, the other option. However, in my memory, the teaching was abysmal, taught in traditional boring rote memory style, and not respected by the schoolchildren. Plus, although the class was claimed to be guo yu 国语 (national Chinese language), the Chinese words were taught in local Cantonese language, quite different from Mandarin, the official language of China. It was like village students in China I met later in life, who tried to learn English as second language, reading words written on the blackboard, taught by a teacher who didn’t really speak English. To me, Chinese was hard enough as a language, without having a non-Mandarin speaking teacher who made it harder.
I remember making a valiant effort (I thought) to improve my Chinese in class, but no one informed me that the secret of language mastery is through casual childhood storybook reading, and not really through formal class time. I suspect that since I essentially read no Chinese novels, classical or modern, or Chinese newspapers, or even Chinese comics in my spare time, I was set up for failure! And of course, I never spoke Mandarin.

My only remaining brother, who is an American university librarian, somehow recently convinced my former boys’ school, to release my school records to him, without asking my “official consent (!)” He slyly forwarded them to me afterwards: that’s what a good brother is for, no need for protocol! Thanks to him, I found out something I had totally forgotten, or wiped out of my memory. One year (only once, thankfully) my place in the second language Chinese class was number 66, out of 67 students. As they like to say in Chinese, I was number 2, counting backwards, Dàoshǔ dì 2 倒数第2 (See photo).

Photos 1 & 2: Proof of my poor Cantonese Chinese grades, dug up from old school records by my investigative librarian brother. That is what good brothers do, uncover truths dormant for decades. Also, a reminder that school grades bear no simple relationship to later life?

However, there was fortunately another circumstance that prevented me from total language disaster. Most of the extended family attended a Swatow (Shantou) church, and I went along on Sundays. I learned to speak and (sort of) read the bible in the regional Chaozhou language. The senior pastor was passionate about the language, and he insisted that all communication in the church be done in Chaozhou, an “immersion experience” for me, which I accepted without a whimper. 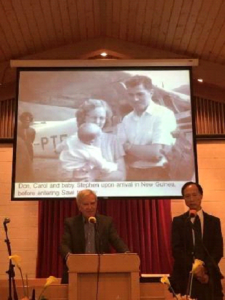 Photos 3, 4, & 5: Listening to side by side translations is an excellent way to learn languages. However, it requires chutzpah to actually be a translator (middle photo), since everyone in the audience is potentially a critic. For me, this was one tough but effective way to learn Chinese!

As a personal bonus to me, the sermons in the adult services, which we had to attend as children, were not only given in Chaozhou, but sometimes in Mandarin, translated “side by side,” phrase by phrase, into Chaozhou. Even though I might not have totally understood, I’m sure the language tracks, especially in Chaozhou, and maybe even a bit of Mandarin, were being, step by step, subconsciously, etched in my brain.

Thus, my dominant language theme was English for most of my life. But in the one-year Chinese School, and in the streets of Hong Kong, I was exposed to Cantonese. In the Swatow church I was exposed to Chaozhou with a touch of Mandarin. All these inputs were just wonderful for my developing language brain, for which I am eternally grateful. To clarify, for westerners, Mandarin is like official Latin of Europe in days past, while Chaozhou and Cantonese are like Portuguese and Spanish spoken in homes and community, related but not the same language.

However, it turned out that much later, surprisingly, the greatest inspiration for my Mandarin language journey occurred after our arrival in Cincinnati, USA, and helping to start a “Chinese language” church. Cincinnati is a Midwestern town with few Chinese speakers, especially during the 60s-70s era. The people in church were mostly from Taiwan, speaking Mandarin Chinese derived predominantly at the time from mainland China, where their own families originated.

Because of ministry opportunities and responsibilities, and because I am pretty brash about learning languages (I have no fear!), I began to talk, talk, talk in Mandarin Chinese, to survive and communicate. In the Jewish Yiddish language, that brashness is known colorfully as chutzpah, and I had plenty of that. 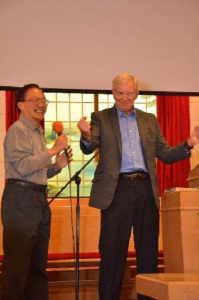 I learned chutzpah, or “brash confidence,” very well in my pediatric residency at a large Jewish hospital in Chicago, in the first few years in the USA. I confirmed quickly also my own version of the American “can do” attitude, close to Jewish chutzpah, “be bold and just do it.”

In American mythology, the Wild West was conquered with that kind of confidence, when wilderness, severe weather, and hostile local tribes were not considered obstacles. And it aptly described my attitude to language. You cannot be shy if you want to learn languages! In retrospect also, I suspect my childhood exposure to many languages gave me the starting points, and extra courage, in my language journey.

I never cared if people laughed at my Mandarin. I took the attitude that, hey I’m trying, and if you can’t understand, you may need to listen harder! A very effective way to learn, I think, though I’m sorry for the hearer, ha (no, I’m not really sorry)! Very soon I was able to communicate reasonably well, even though, because of my poor Chinese language foundation, my actual grasp of literary and written Chinese was still quite weak.

In addition, I actively learned a lot from weekly sermons, mostly given in Mandarin. I just physically “mouthed” the Mandarin Chinese words, as the Mandarin preacher spoke, or, when there was an English speaker, as the translator translated the sermon to Mandarin. Either way, I began to learn more literary Chinese words, and especially Mandarin biblical terms. And, singing hymns in Mandarin also helped, bit by bit. 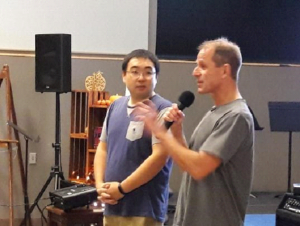 Very brashly, chutzpah indeed, I even later volunteered to translate from Mandarin to English, partly because others were often shy, and I wasn’t at all! It was the best training ever, since I had to listen very carefully to each word, and translate instantaneously into my mother language, English. This was really great brain training, and I could literally feel those Mandarin words being sculpted deeper and deeper into my brain language tracks. I learned to catch nuances of language, and Mandarin biblical concepts, so that my translations really became “acceptable,” at least in my own estimate! Brashness and confidence can do wonders!

Mystery of Language (Part B): Where Does Language Come From?

Organizing a Strong Youth Program: YFAN, Youth for All Nations