One early morning in Cincinnati, I was on my way to University Hospital for my one time radiation of my prostate cancer. My phone rang in the car; it was from Lisu pastor B in Thailand, 12 time zones ahead. Pastor B had spent his life working faithfully among mountain tribes there. He told me he just had a heart attack and was in the hospital receiving critical care. Up to that point, I had not thought that mountain tribal pastors had heart attacks, something I thought only happened to big-city affluent people.

It turns out to be more common than we think. Imagine the scenario from the tribal perspective. Our wonderful pastor comes to visit us in the mountain villages, as part of his regular visits to different congregations throughout the year. What are we supposed to do? We love the pastor, we think he’s doing great work, and he’s serving the Lord so faithfully. We feel, “Our village should really give him the very best, we should celebrate, he’s only here a few times each year, we should be thankful to God. So let’s do our very best by … “

“By slaughtering the best, the fattest, to provide the most delicious dish we have, the fat of pig, from the fattest pig. The best product of our village. We always celebrate the best occasions with a feast of delicious pork! And what a wonderful feast it would be, lots of pork, fattest pork, and especially for the pastor! He well deserves it, and it’s awhile since we’ve had the opportunity to celebrate. We will all do it together, and have a joyous party. With the pastor as the guest of honor eating the best food.”

That might be okay if it was only once a year for the pastor. But if he is the best pastor, he’s traveling from mountain to mountain, village to village. And guess what, since he’s so good and so appreciated, at many villages the same thing happens again, and again, and again. And guess what happens to the lovely clean simple arteries of the pastor. They become coated, coated, and coated with fat, cholesterol, and clots that sooner or later might clog them up. Just like the pipes coming out from our kitchen sink when we pour oily liquids into them, day after day. And that’s what happened to my good friend, the very best pastor of those mountains.

And I saw or heard it happening to other good pastors in USA or Hong Kong: it’s a similar story with variations. In USA and Hong Kong, it’s not as dramatic as slaughtering the tribal wild pig, but just as effective for artery clogging … Just lots of banquets and dinners which congregations invite their pastor to honor by attending. You’ll be amazed what the professional hazards are for being a good pastor! Of course, maybe if he’s not such a good pastor, he doesn’t get this first class treatment, and he might be spared…!

The Asian culture is particularly good for this kind of approach. Asians are hospitable, Asians love food, and Asian Christians love their pastors. In addition to big parties and celebrations, even if he’s just going to visit the family, guess what they serve him at home? Westerners might be happy just with coffee, but no, sorry, Asians always try to serve something more, so wherever he is going, just to stop and offer prayers for someone, food or pastries often is served. Or, “Let’s go out for lunch, for dim sum, or…” 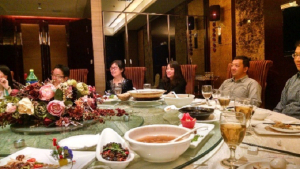 I had a variation of the treat-your-pastor-well syndrome. When I was working in China, my first decade was in poverty areas. Yet because of the long-standing tradition of hospitality even in villages, there were always banquets and banquets. To welcome us or to say goodbye. Even for relatively poor villagers, they would still try to host banquets with 20 dishes (!) on the table. There was truly no room to put that many dishes on the table, so plates were often stacked in complex ways to display all of them! It’s something Westerners cannot fully comprehend.

And the only way I could escape becoming a 250 pound Asian was that I carefully allotted my portions. There is a tradition and mythology that for anyone to eat a decent Chinese dinner there must be plenty of steaming delicious rice or noodles. And that’s what basically helps kill you. “Carbs” on top of heavy calories. So I tried really hard to cut these down, until finally I came to eat practically no rice or noodles. 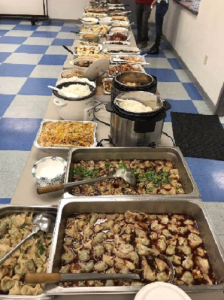 There was plenty of carbohydrate (and calories!) within all the other food, and so I never had carbohydrate deficiency, that’s for sure! However the hosts did not believe that, and took great efforts to push rice and noodles onto my bowl, expressing horror that I didn’t eat rice. “How can you not eat rice? You need to!”

When given a full heaping bowl of rice regardless of whether I wanted it or not, I would place the other delicacies on top of the rice to make it look like I had a whole heaping bowl of delicious food. And nibble away at the food before me, just eating a small bite at intervals. That way nobody could accuse me of not eating, and it was more difficult to add more food on top of my full bowl. Although at times the host was smart and piled up food on a traditional small plate next to me. The key on my part was to always look as if I was full, and had full access to abundant food. 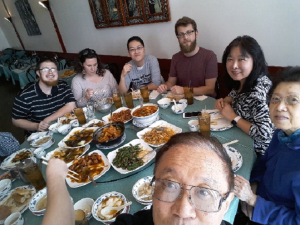 During the latter half of my time in China, I mostly worked with modern upscale hospitals and universities, where again there was great hospitality. In this case the food was much more elegant and expensive, and there was a bit less push for me to eat lots of rice. But the potential impact on my arteries was still there. Just too much food! I had to work hard to “keep my slender figure, baochi miaotiao shencai,” in spite of my ultimately 30 years of feasting in all kinds of China banquets!

It’s great fun to love and support the pastor, or foreign guest, but I’m sorry, it’s super dangerous to their health and hearts. If we want to save the minister for future good work, be careful to not hasten his departure. As to Asian hospitality towards foreigners, I’ve already noticed that modern sensitive hosts are becoming less “pushy” for rice, providing healthier choices, and allowing even some guest choices, but foreigners still need to learn defensive strategies. You might love panda bears a lot, but certainly you don’t want to become one. Especially one with heart attacks. 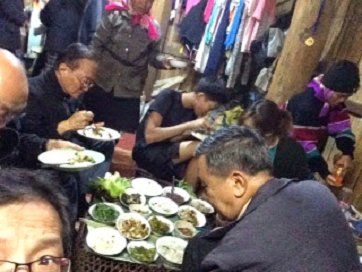 Ideas Are Cheap, Show Me the Data

Who is the Highest Authority?
谁是最高权威？