For 47 years I lived close to the beautiful Ohio River, in the river town of Cincinnati. The great Ohio River flows westward from Cincinnati to become the famous Mississippi River in the state of Illinois. From Cincinnati down to New Orleans, in the Gulf of Mexico, the river does not generally ice up in winter, so it is navigable year-round, providing a great continental way of transporting goods. On a plane, I sat next to an experienced river barge pilot, who explained his fascinating life to me. As he steered his tiny river boat, he could push sometimes 18 barges, laden with goods, all at one time, 3 barges across, and 6 barges deep. He could skillfully navigate his flotilla to their final destination in the Gulf, when he would fly back to Cincinnati to pick up new barges once again. He loved his exciting job, the beautiful views on the river, and the pay wasn’t too bad, matching airline pilot pay!

Very few people have had the experience I had, to regularly take the historic Anderson ferry, across the Ohio River to the airport. My home was near the Western Hills of Cincinnati, 15 minutes away from the ferry crossing in Ohio, but by 7 minutes boat, I easily reached the northern shores of Kentucky, where the International Airport (for Cincinnati!) was literally only 5 minutes by car away! This river crossing is a well-kept secret, even for people who have lived decades in Cincinnati.

During my numerous trips, I befriended the ferry boat pilot, and he explained to me, proudly, that it was a family heritage and privilege to be working on this unique ferry, from the time of his youth. He declared, to my enthusiastic agreement, that the crossings were especially charming in autumn, floating among brilliantly foliaged trees of red, yellow, and orange, on both banks of the river.

In spring, the crossings could be particularly exciting, when the river was overflowing from rain-driven swollen streams feeding the river, and currents were strong and fast moving. Especially when fallen tree logs and branches could be strewn all over the river, forcing the pilot to navigate cautiously through the debris, without damaging his boat. The pilot initially would elegantly steer the ferry against the angry current, until midstream, when he would be pushed, in the opposite direction by the current, to land the vessel precisely and ultimately onto the landing on the other bank.

This ferry crossing was definitely much more fun than the alternative of driving down congested expressway I-75, much more scenic, and usually quite serene in non-rainy season. I finally revealed this “secret” to the world on Trip Advisor, as their “Cincinnati travel advisor,” and I hear some people have begun to look into this no-longer secret. So now you are also in on this rare piece of knowledge.

Rivers are usually significant historic and geographic dividers, and this Ohio River was on the north-south divide for the tragic American Civil War. Today however, we can drive smoothly across the river on the iconic Roebling bridge, immediate forerunner of the larger, identically designed and likely more famous, New York Brooklyn Bridge. The bridge is one of 10 pretty ones across the Ohio River, poetically linking north and south.

The legendary Mark Twain roamed the Mississippi, and wrote about young people whose homes were along the river.  In his world-renowned “Huck Finn” story, Huck and Jim, his escaped slave friend, were heading south, on the upper Mississippi, trying to get to the Ohio River, to Ohio and freedom, but missed the mouth of the Ohio River at Cairo, Illinois, so they had to go on down the Mississippi for the rest of their adventures. His story reflected the Ohio/ Mississippi River slavery-is-normal culture of the time, and is particularly thought provoking for many other cultures that have gone through analogous historic times of slavery to its abolishment. Freedom is a great driver for life, then and now.

Legendary explorer of the Ohio and other rivers, Daniel Boone also worked among, or fought with, native Indians in the forests south of the Ohio River. His knowledge of local Indian culture, his empathy with them, and adoption by a Shawnee Indian chief, made for my great childhood reading about his exploits and adventures. And of course, Abraham Lincoln, the great Emancipator of slaves, wasn’t that far away also, in Kentucky in his proverbial log cabin. His family was very poor, and I can easily visualize his splitting logs, and reading his Bible by candlelight, again and again, the only book he possessed for a long time.

Little did I know that these famous stories, which I devoured, likely surprising to some, from my childhood in Hong Kong, would translate into my living for nearly half a century near the river and forests of my heroes. In fact, not much even seems to have changed over the last several centuries. The vibrant river and dense forests along its banks, still look charming and pristine to me. Whenever I cross this beautiful river, I can easily imagine, that, around the next bend, my heroes are there, sitting by a wood-burning fire on the river banks.

The most amazing story of this river, I think, is that this was a great river crossing for thousands of slaves escaping from the south. Brave people, black and white, helped them escape by boats, to reach homes that had a candle in the window sill, signifying that they were a safe place to hide, before they were smuggled onto wagons and trains to go further north, even to Canada. Many of these stories are captured in the unique Freedom Museum of the Underground Railroad, the only one in the country, located perfectly at the junction of the Roebling Bridge on the Cincinnati river bank.

I brought international friends to this museum because of this great story. I remember bringing one Christian volunteer serving migrant factory workers in China. He was very touched, and told me that the visit helped inspire him to clarify his own calling among the urban poor, living in quasi-serfdom, and similarly neglected and often deprived. Imagine, an old slavery story having an inspirational impact on work even today.

I often brought medical scholars from China, who were visiting at the famous Children’s Hospital of Cincinnati, on a 2-monthly grand tour of Cincinnati. We always stopped to see the large historic wall murals on the Covington, Kentucky, southern bank of the Ohio River, directly across from Cincinnati Reds Stadium on the northern bank. One mural was especially poignant. It depicted Eliza, the slave who escaped across the frozen Ohio River, with fierce dogs coming after her, in the dramatic story of uncle Tom’s Cabin written by Harriet Beecher Stowe.

This great story was written right on the banks of the Ohio River, near Cincinnati, by the author who watched slaves coming through her home as a safe place, on their way to freedom. Her father was a pastor who was heavily involved in the rescue of slaves, so she learned a lot directly about the tragic personal stories of the runaway slaves. She wrote these stories down through her brilliant book, that many, including Lincoln, say triggered the Civil War. Many people before that did not fully realize the cruelty of slavery, until the book made it very clear to them what was going on in the lives of real people. For scholars from China, as I showed them the mural, I realized this was a book that nearly all of them had read in China, as an example of English literature, (and maybe American racism, I suppose), so it instantly clicked in their minds. Truly a great story that transcends countries, ethnicities and times.

Famous Negro spirituals, mostly developed in slavery days, often used the biblical imagery of Israelites crossing the famous Jordan River, to finally enter the promised land of Israel, a spectacular historically significant event. This historic river still exists today as a link of the famous Dead Sea to the Sea of Galilee. For many enslaved blacks yearning for freedom, the Ohio River literally became the critical crossing to safety, or to the promised land of freedom beyond.

Indeed, I think that practically everyone has some kind of a significant crossing, in pursuit of a better life, a promised land, or an ideal. Many people have even crossed oceans just for that, even though it might have been an arduous effort. My own mother followed her sister across the oceans from America to China, following an ideal. Her parents, my maternal grandparents from China, also answered a calling from America more than a century ago, for grandpa to serve as one of the first pastors of the original Chinese church in Seattle. We all have an inner search that there must be something more in life, across the river, sea or ocean. There is a famous expression by the legendary brilliant mathematician, Pascal, “that there is an emptiness, or hole, in our heart, that can only be satisfied by God alone.” Our search, our crossing, finally has an end. 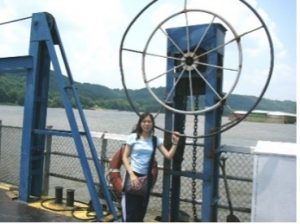 I once had an excellent mentee who exceeded in everything that I tried to teach him. One day in a very candid moment he said to me, “you taught me everything, I’ve achieved everything, there are no more mountains to climb.” My equally candid riposte to him was, “try God.” A final crossing, a final aspiration.

Organizing a Strong Youth Program: YFAN, Youth for All Nations

Mystery of Language (Part A)